¿Qué Pasa, USA? is a cultural treasure. It is America's first bilingual situation comedy that explores the trials and tribulations faced by the Peña family in 1970s Miami as they struggle to cope with a new country and a new language. Now, 3 decades later, the show still resonates with Latinos who celebrate their "Cuban-ness" and remember life in "exilio."

What keeps the show fresh is its ode to tradition and the bonds of family, as it interconnects with life in exile - and a new-found freedom which was, at times, more than the Peña family could ever bargain for.

¿Qué Pasa, USA? is an important history lesson for all of us. It gives us a window into a time when this country experienced a cultural revolution and our differences became lost in translation.

“Pepe and Juana might become the Latin Ozzie and Harriet.” – People Magazine

South Florida PBS invites you to the ¿Qué Pasa, USA? Experience on Thursday, April 14th at 7 PM at the Actors' Playhouse at the Miracle Theatre in Coral Gables!

This free event will provide an immersive Cuban cultural experience which includes a marathon of your favorite episodes of ¿Qué Pasa, USA?, a cocktail reception with delicious treats, a special performance from the Frost School of Music Cafe con Leche ensemble, Mojitos and much more!

You must RSVP to attend and seating is limited so RSVP early. 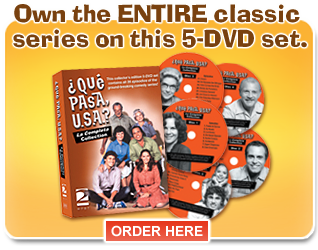